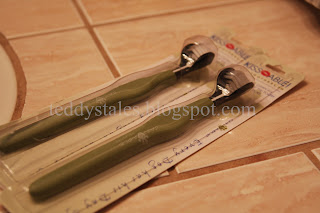 This may sound impawsible but both Sierra's and my toothbrush broke last night. Sierra's was the first to break, right before our bed time ritual time while Mommy was putting some paste on it. With a light snap her brush broke into three pieces. My brush didn't break until after brushing my teeth. While Mommy was spreading it apart so I could lick every last drop of my homemade toothpaste from between the little bristles, one of the sides broke off. I was as shocked as Mommy because this was already a new toothbrush to begin with. We took some pictures of the broken pieces before putting them into the trash but then somehow lost all of them. In the modern digital world lost photos actually mean accidentally deleted photos.
Posted by Teddy Bear at 10:56 PM