Fun on a Friday 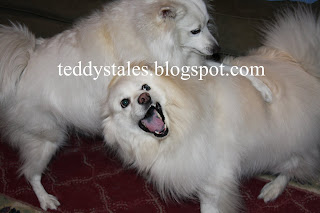 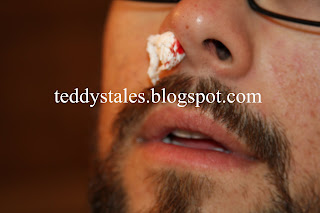 Today was a very playful day. Sierra was feeling all better. She chewed her bandage off so that we could wrestle. That is until Daddy broke it up saying she needed to go rest her paw some more. Then Daddy tried to trick me by sliding his hands under the couch while we were playing so I couldn't bite them. That's when Daddy 's face was in the wrong place at the wrong time. As I jumped up I smashed my skull right into Daddy's nose. He ran to the bathroom with a nose bleed. Wow! What a crazy seven days it's been. Let me give you Friday follow up. I guess it started when Daddy stepped to close to the couch and broke the nail off of his longest toe. Then if you recall I had a bad case of diarrhea and wasn't feeling all that well. Then it was Sierra's turn to feel pain so she broke two of her nails while barking at the girl next door. Tonight Mommy stubbed her toe but no broken bones and no blood so she will be just fine. Lately if you don't bleed it's not an injury. I hope we have a less eventful week ahead of us.
Posted by Teddy Bear at 9:45 PM